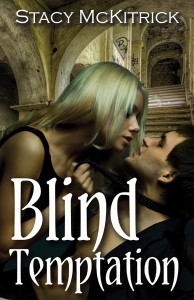 Dreading the prospect of losing her position on the Vampire Committee, Victoria is forced to integrate with the mortal population. She hasn’t stepped outside since her husband died over 40 years ago and the thought of being treated like the 17-year-old she resembles frustrates her. But when she discovers that Ben, her hot & sexy driver’s ed teacher, is blind, she gives into temptation and flirts. She never expects to fall in love.

Ben knows he shouldn’t get involved with Victoria—she’s his student. But something compels him toward her. She makes him feel young, alive, and more importantly, whole.

Victoria would love nothing better than to have Ben as a mate, but fears he wouldn’t want to be blind forever. As she struggles to keep her identity hidden from him, an old acquaintance of Victoria’s turns up and is willing to do anything to win her love, including disposing of her boyfriend.